I read this article in The Economist about hillbilly Italians in Arkansas, and was captivated by this photo: 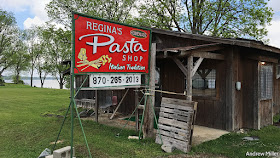 I immediately started plotting ways to get there, and remembered my Dallas trip was coming up. After hitting the maps, I discovered that Lake Village, Arkansas is a mere six hour drive from Dallas.

A six hour trip on a whim? You bet! What makes me me is that I act on impulses. I track down tips, and don't sit on them forever. I generally do stuff (anyone with a predilection for depression would do well to always choose action in any given circumstance). Nearly everything good that ever happened to me came as the result of what others might describe as impulsiveness.

I always take country roads in the South (and in Texas, particularly) rather than highways. You can still go 70 or 75 mph - in fact, there's less enforcement than on highways - but you get to experience actual life and scenery. So much better!

That's what I did, and eventually passed through Tyler, TX, where I got uncommonly lucky in a rural part of town with a Yelp search that sniffed out Yall's BBQ and Produce, a fun, funny, multiracial operation that appears to serve pretty much only the surrounding half mile or so. I told them I'm from another galaxy, which cracked them up.

They do real home-cooking, such as Tater Tot casserole and an array of shrink-wrapped, home-baked experimental pastries, heavy on various chips (choc, peanut butter, butterscotch, etc). They offer free tastes of everything they make (!), and the casserole was unfancy (understatement), but brilliantly balanced. And while they offered some straight barbecue choices, this is a place that mostly commoditizes it's 'que - it's ingredient fodder rather than fancy rosy-ringed fetish meat.

I never order barbecue solo in a place that mostly uses it as an ingredient, and, in any case, the owner steered me firmly toward a Texas-sized "Texas Spud" which I still don't completely understand. 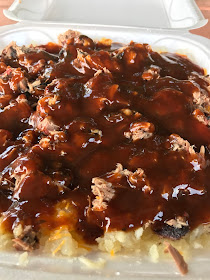 An abnormally gigantic potato is violently flattened in the styrofoam, whereupon slatherings of cream and sweet sauce and chunks of barbecued beef are applied, with a few surprises strewn under the drapes of Stuff. It was great, though definitely "eating" food rather than "tasting" food.

I was asked whether they play the TV commercial up north where the guy exclaims "New Yorkers? Somebody get me a rope!", and I giggled (it was asked good-heartedly). I said no, but that I never met a Texan I wouldn't want to spend a few days drinking beer and hanging out with....and that Texan tourists in New York always appear to be awfully happy, as well. She asked whether people back home feel superior to folks with country accents, and I told her that you need to be an idiot to feel superior to anybody - so fools who think that way are just demonstrating their inferiority.

That earned me a free soda, a free gumball, and a loyalty card ("Even if you come back years from now, we'll still honor it"), and I was processed through to the back yard where hubby was manning the bbq pit while his crew of shy, kind-eyed, terrifyingly built pals sat around sipping soda. More good-natured cross-chasm banter ensued, though I didn't get to use my prepared line about Trump ("If he makes things great again, I'm all for it. I'm just not sure I trust that billionaire dude to act in our interest. As I see it, you and I are on the exact same side, but it remains to be seen whose side he's really on").

The potato thingee was great, though squadrons of hornets kept dive-bombing my Dr. Pepper. It was a memorable half hour, and I miss Yall's already. Look at all the love they've put into the place: 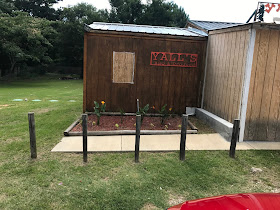 In Texarkana, I had some fancy rosy-ringed fetish meat at award-winning Naamans BBQ (their brand new "Hot Spot" at 5764 Hwy 59 S). Super-good brisket: 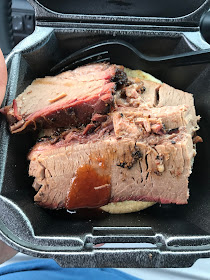 ...and the sweet tea was primo, too (when the simple parameters are perfectly in synch, this stuff is like nectar of the gods). I was right on the Texas/Arkansas line, and, disoriented, I asked which state we were in. Note: this is not a polite question to ask. My incensed counterwoman let me know that this was Texas, that she's Texan, and that she doesn't know anything at all about any Arkansas.

I should have ordered a Lone Star, but, instead, I was a prick and got a Shiner IPA (non-horrible). I unconsciously swirled the bottle a little before sipping, and studied the flavor with a brief but perceptible wine snob aroma suck, and I immediately noticed that one dude had seen this, and, quite rightly, was grinding his teeth with barely constrained malevolence. My bad. Happy people, and a great scene with great vibes. Texans really know how to live (but...woops, this was just over the line in Arkansas. But still!).

In Arkansas, I drove through a procession of burnt-out, calamitous small town main streets, each of which had obviously been middle-class shiny/prosperous in 1965. This wasn't grinding static poverty; it was precipitous decay, ala Detroit. America is not doing great. It's Detroit most everywhere.

Finally I arrived at Lake Village, Arkansas, on the Arkansas/Mississippi border, where I passed the irresistible exterior of Rhoda's Hot Tamales and Pie (714 Saint Mary St).... 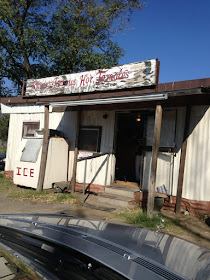 ...and met Rhoda and her husband: 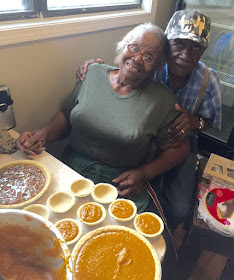 Note that I've stolen the above two photos from Jamie H. and Nolen G. (all other photos are mine).

Remember: this is an Italian area (though Rhoda and her beau are clearly not Italian). And it's Friday. This explains the fried fish, as well as the spaghetti. 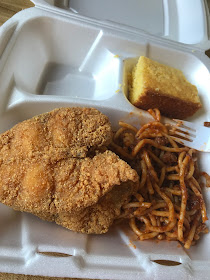 The fish was masterful, of course, though not hot/fresh. The spaghetti was homely and soulful, though I don't need to tell you "al dente" was not a goal. But let's talk about that cornbread.

I noted in the previous installment that good soul food is light, not heavy - a miracle, considering the ingredients and cooking methods are all heavy. This titanically scrumptious corn bread was beyond light. It never actually touched any portion of my mouth. It existed in an entirely other plane, and I have nothing else to say. It ranks along with the Oaxacan Medusa Gruel as one of the most remarkable, mysterious things I've ever eaten. 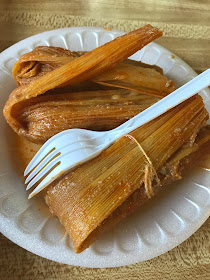 The hot tamales broke my brain. I expected copious cumin and hot pepper, but we were a bit too far east for that. I have no memory of anything but eating like a crazed animal, and nearly blacking out at several points from the deep primal joy. Rhoda also makes pie: sweet potato, pecan, or a half-and-half pie with both. I got a shot of this mini-pecan, not very different from any other really great pecan pie you've tasted, but a bit less obtrusive in its sweetness, a bit longer in its finish, and a bit perfecter in its balance. The sweet potato pie filling wasn't quite smooth; the micro-chunks seem to have been created via some advanced laser lathing system, achieving a precise, ideal diversity of texture.

No Trump discussion here, as no one in the restaurant could understand a single word I said (don't they hear Yankees in movies and TV?). Seriously, I had to pantomime, as if I was in Burma. Rhoda did eventually come to understand that I was from New York, and expressed her sympathies for 9/11, which I appreciated. There was a brief sad moment, which was as much as we were able to share (I didn't try to discuss astral planes or laser lathing).

After much mapping and phoning for help, I finally managed to locate the mythical Regina's Pasta Shop, but I'll save that shaggy dog outcome for next time.